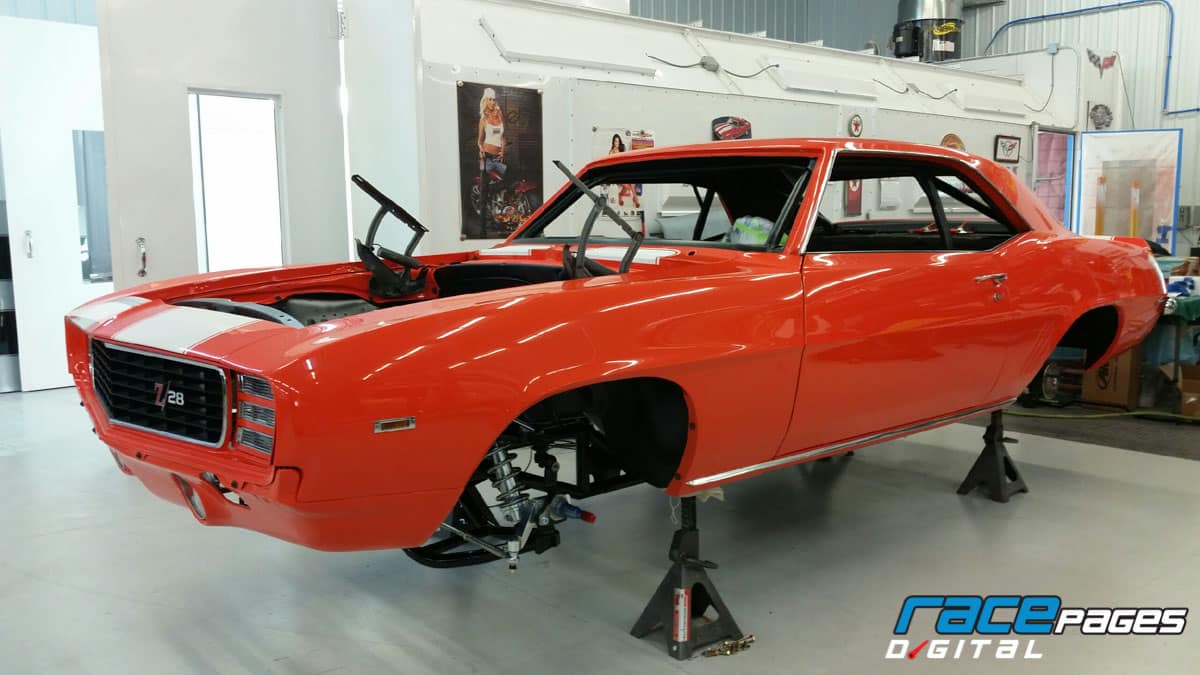 Even more than 50 years later, the first-generation F-Body Camaro and Firebird twins remain popular machines in the world of motorsports—especially in drag racing. The platform retains its demand for many reasons: striking appearance, simplicity, and perhaps most importantly, a robust aftermarket that delivers a massive array of performance parts that work well in motorsports applications. Speedtech Performance is one of those companies manufacturing products used in the NMCA by several racers. Among them is Kurt Anderson of Eau Claire, Wisconsin. Kurt is no slouch in the driver’s seat as he is a multi-class champ in NMCA competition: Chevrolet Performance Challenge Series Street King in 2017, and Magnafuel Open Comp in 2018.

Anderson is no stranger to building bad-ass cars, either. His Autokraft Race Cars and Restorations shop in Wisconsin is world-renowned for its capabilities in classic muscle car restorations and world-beating, purpose-built race cars. Autokraft built Jason Line’s Buick GS455 that attained a near-perfect score at the Corvette and Muscle Car Nationals in 2017—scoring 999 of a possible 1,000 points—among other award-winning and championship-capturing muscle cars. With Kurt’s bona fides out of the way, let’s discuss his recent experience with one of the products from Speedtech Performance, the company’s First-Gen F-Body Drag Race Sub Frame kit.

Kevin Lumsden’s 1969 Camaro, which is destined for the Chevrolet Performance Stock class, received the Speedtech Performance front subframe along with numerous other upgrades and work performed by Autokraft.

“It fits awesome. I was impressed with it when we got it. I think the bare frame weighs 55 pounds; it’s pretty light,” says Anderson. “It’s straightforward to install. There are six bolts, and then the [optional] forward down bars that need to be cut to fit and welded in. If there were any issues with this thing, I’d be the first one to tell you if it’s not right. It’s a really nice, well-engineered piece. The front frame horns are shaped like the factory horns, and that allows you to bolt the bumpers and radiator support right back on without modifying anything.”

Blake Foster has been testing this system for several years on his low 9-second big-block ’69 Camaro, and once he was satisfied with its performance, the company went to market with the product. The suspension angles have been optimized for drag racing, while the forged aluminum spindles will accept a custom-designed brake package from Mark Williams that also includes their exclusive Gen-5 Camaro drag race bearing pack that reduces weight and rolling resistance.

The Speedtech Performance system is designed to withstand the abuse of a drag racing application. It also offers a massive reduction in weight—critical for those applications where a racer is trying to get a vehicle to a class-mandated minimum weight. The use of chromoly tubing along with carefully placed triangulation improves rigidity. As a side benefit, the Speedtech Performance unit reduces front-end weight by 125 pounds when compared to the factory subframe and suspension components.

In this photo, we can see the motor mounts that Anderson fabricated for this Camaro build at Autokraft. Many pure drag racers will appreciate that the frame kit can be ordered with a motor plate system; here, it was not used. Additionally, check out those beefy upper control arm mounts with long slots to help optimize alignment settings for the strip.

One item that Anderson noted was an initial concern for him was the lack of motor mounts, as the kit is delivered with the customer’s choice of motor plates. One of the cars he’s installed the system onto needed to have motor mounts instead because the customer had several accessories to mount to the front engine drive system, so he fabricated up a set of motor mounts for use with the frame before powder coating it. He corresponded with Blake Foster—Speedtech’s President—to show off the pieces he made, and even sent a set out to the company with the expectation that they will offer motor mounts as an option on the frame going forward.

The tubular upper control arms are mounted using beefy aluminum cross shafts to reduce weight without harming strength, while the tubular lower arms mount directly to the subframe. Speedtech has altered the geometry of this unit—which differs from the other three styles Speedtech manufactures for this chassis—to provide geometry improvements specifically designed for drag racing.

One unique feature it offers is the pair of long, slotted transmission mount plates that are pre-installed to each framerail.

“It’ll fit any kind of transmission you want to put in there, too; a Turbo 350, Turbo 400, or Powerglide. You square it up, and you’re done,” says Anderson.

The Viking double-adjustable shocks are offered with a few different drag race-specific valving packages to help the end-user to dial in the suspension for drag racing action. Spring rate can be chosen to better accommodate small- or big-block cars along with LS power. Factory or Speedtech drop spindles can also be used to alter ride height.

The tubular upper and lower control arms help to reduce weight. Foster tells us that Speedtech chose to build the control arms out of larger tubing than other offerings for two reasons. Number one is safety, as they felt the slight amount of weight penalty would be overlooked when compared to the strength gained, and secondly, that the subframe was also intended to be used on Pro-Street-type applications as well.

You can use stock spindles or the Speedtech forged drag racing spindles that accept Mark Williams-style brakes. All of the necessary hardware is included, so you’re not standing at the hardware store searching for fasteners. Everything has been optimized to be clean, neat, and well-engineered.

Most importantly, this Speedtech Performance system is a complete bolt-in subframe, which means that it’s legal for stock suspension race classes in most instances. Of course, you want to make sure you read the rules carefully, but isn’t that part of the fun of building a class-legal car?