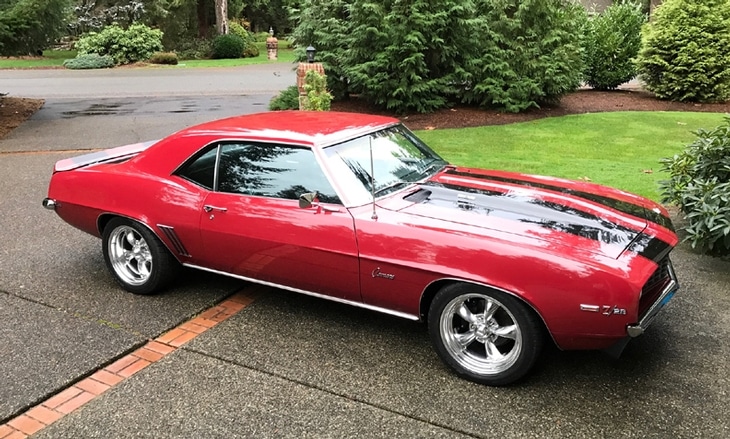 Steve has always been around hot muscle cars, starting with the influence of his dad racing his ’56 Vette on the streets of L.A. in the 1960s, and he was wrenching on cars with his dad even before he could drive. Having owned several Vettes, Camaros, a ’70 440 6-pack Challenger and other cool old cars, he’s always had a real love for the early Z/28s, with their rough idling, high revving DZ302s and that factory cowl induction hood buried beneath those bold twin racing stripes. His current ride you see here is an original Z/28 that before Steve buying it just a few years ago spent a good portion of it’s life racing. Although fairly straight it was very neglected and a good thing it finally ended up in Steve’s hands. He decided to completely rebuild and restore the car intentionally to have it just the way it was back in ’69, with the exception of the previously ported factory heads and an upgraded Comp Cams Nostalgia cam kit.

After being a stock restoration for about a year Steve decided doing some minor upgrades that he would’ve done back in the day anyway were an ok compromise with it’s restored status. A higher powered ignition and headers were installed to help keep power flowing at high rpms. Replacing the 15″ factory rally wheels is a set of Torque Thrust wheels in a more modern 17″ version, and to better improve handling a set of aftermarket larger sway bars we’re added to the mix. Steve was so excited about the power and handling performance improvements of the car he called up Speedtech and as the next step towards a complete handling upgrade ordered a set of upper and lower control arms to help dial in the front end geometry. At the rate he’s going, it won’t be long before this car is tearing up the curves much like the original track driven Z/28s that dominated the early SCCA Trans Am racing series. Nice ride Steve! 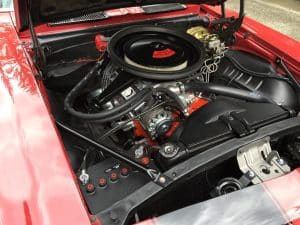 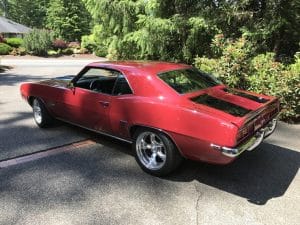 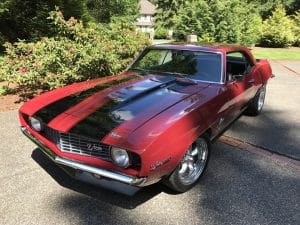