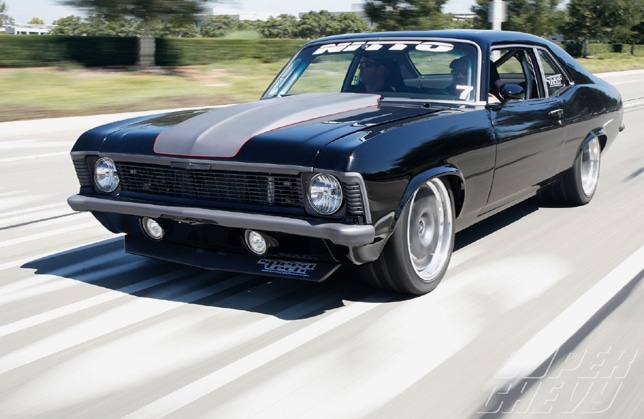 “Even though the Nova sported some of the same high-output powerplants as its close sibling, the Camaro, the X-body never had a true handling package option like the Z28. In its prime, the classic Nova muscle car was always a go-straight, go-fast, quarter-mile sprinter. Fast forward to the 21st century, and with the help of Speed Tech, an econobox Nova can easily become all the corner-carving terror its brother ever was.

This black beast originally started out as Super Chevy’s aborted “No Bull Nova” project. Speed Tech adopted the car, stripped it back down to bare steel, and rebuilt the X-body into a deft handling street machine, in a matter of just three months. Because of the car’s history, the crew at Speed Tech rechristened it “ResurreXion” in homage to its X-body designation. In 2009, Speedtech brought out its cone-destroying Fathom Green big-block ’69 Camaro, and the Nova was definitely a worthy standard bearer for the company at the 2010 challenge. 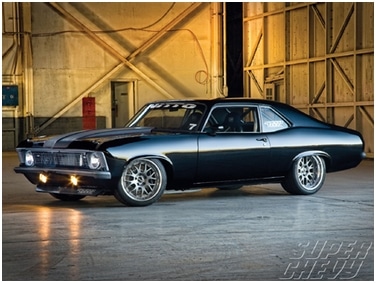 “Driver’s Impression- Autocross Course: Talk about throwing darts! This car went where pointed, courtesy of the perfect and precise steering. …Flying through the first crossover and sliding the Nova through the second had me flirting with Superman status, as I could do no wrong. …With awesome feel and high traction threshold, the car offered great feedback and super grip, with absolutely no push. …Amazing feel and feedback-you don’t often get to enjoy spirited driving with a car this fun. …This Nova proved itself a willing partner and I had a blast behind the wheel, wishing I had more than my allotted five runs available.”